Halloween is creeping up on us (or, if you’re a true Halloween celebrant, it’s been Halloween since October 1st) and that means the Bram Stoker festival is lurking up ahead. Hunt and Gather have lured our resident Goth out of the cemetery to give us some spooky recommendations on the festival

There are a whole host of juicy events dripping with the lifeblood of a good time coming up for the festival, and while there are some family friendly events like the Spooky Sound Lab and The Vampire with No Teeth, I generally think they’re sorta lame so I’m gonna be focusing on the more genuinely creepy or intriguing parts of the weekend, because kids are sticky and hyper and have no place in the ghoulish and frightening.

There are so many gruesome classics and over 30 new releases being show from Thursday 24th to Monday 27th. I personally recommend checking out their genre-defining classics including Theatre of Blood which they have on 35mm film which is so deliciously crackly and atmospheric in its own right. Check out the House of Usher too, because a bit of Poe is mandatory during spoopy season. I find short films are often better suited to the medium of ghost stories, much like short stories are scarier than novels (sorry Dracula), and thus the IFI’s compilation of short films has definite chill-potential. Also, witchcraft. For the witches. (Note: films cost money)

I cannot overstate how rad this could be. You get to zipline over the city. For free. It runs Friday to Sunday, 10am to 5pm. And you get to zipline. like a bat. for free.

Tickets are allocated by ballot, so apply here now. The organisers are sound though: “Think about what you’re going to wear; clothes/costumes that won’t flap around, shoes that won’t fall off. We’ve been told terrifying kilt stories, so let’s be careful there, yes…?”. I’ve applied. Catch you on the zipline suckers.

Council of the Rats

Not to be confused with the recent reality TV show “The X factor” and its feature “The Judges’ Houses”, which is an entirely different experience altogether. No, what this event is falls more in the category of a guided tour through a creepy house that starts to go horribly wrong. It’s an audio tour that isn’t quite normal. I like to imagine it will be like a creepy version of The MP3 Experiment. This runs Friday and Saturday and is free, but they recommend booking which you can do here

The Cabinet of Dr. Caligari

Now this is more like the cold and eerie creepiness I personally know and love. It’s disturbing and dark and has a big massive twist, and it’s delightfully silent, with accompaniment from avant-garde lads 3epkano. Set to be a tasty evening of eerie enjoyment, if watching weird expressionist films in a cathedral is what you’re into. (It’s what I’m into)

If the idea of watching a spooky film in a church leaves you thinking “Hey, that’s simply not sexy enough” then look no further than our beloved ol’ pals Dr Sketchy’s Anti-Art School, who beg the question “Why can’t life drawing be full of hot people?”. Open to absolute beginners or skilled sketchers, Dr Sketchy’s is a creepy cabaret life-drawing class in a laid back setting. We’re big fans of theirs. They understand our love of theatrics.

Oh yes. This is going to be choreographed and possibly embarrassing and I cannot wait. You’ll spot me by the edge of the crowd making vague comments about how they’re not really goths. And maybe getting a little goth boogie on. Think of the cryptastic whimsy to be had.

This debate will focus on the darkness of the man behind the vampire, and will feature Dr. Jarlath Killeen and Dr. John Griffin, who will delve into the psychological world of Stoker. Turns out he might have had syphilis. I’m no doctor, but I read some biography years ago that said he was gay except that he was mad for (WARNING PG 13) cunnilingus during… that time of the month. I apologise for the grotesque details, but I can assure you that this debate will be dark and full of lurid twists and turns. Hence the uncomfortable close-up of Bram. But this debate will be really great, I do recommend it.

For more dark areas of the vampire myth, Der Vampyr will be staged in St Anne’s Park, right where Stoker was born. This Opera is pretty vicious in its storyline, and promises to be an interesting sight. The story goes that vampiric Lord Ruthven must in one day find 3 brides about to wed and the ravage them and turn them to the dark side, in order to secure one more year of life. It’s rough going for the brides.

Definitely a highlight of the festival. These guys know how to put on a ball and the location will be beautiful for the spooky spectacle. A little pre-Halloween costuming never hurt either (if you don’t have a costume you can rent something suitably terrifying from the fellas on the night), and there will hopefully be lots of dark corners to leap out of and scare the pants of some other guests. Tickets are available here

If costumes and dancing isn’t all your speed, Smock Alley are offering a much more story-telling oriented evening’s entertainment. Four writers go against each other to try win over the audience and the judges with their stories. I am hoping for some chilling ghost stories. There are simply not enough ghost stories floating around these days. Tickets can be obtained here

These guys are offering bloody marys while you browse goth market stalls. I imagine there will be gothic and vampiric tasty treats for all, and the promise of underground cinema screening always pique my interest. Anything beneath ground is pretty solid. Also maybe I can finally pick up a nice skull or flammable crucifix.

This might seem sorta perplexing, but I actually think they might have an interesting take here. This interpretation of the book gives it a reading steeped in Irish folk horror, and works in elements of Irish culture and language that may have been playing on the mind of Stoker when constructing his so foreign fiend. Also has potential to be cheesy and weird, but let’s look on the bright side, despite the eternal life of darkness.

This event highlights the importance of speaking a scary story out loud, and the effect that has on the story-telling. The organisers are going to show this by, you guessed it, reading some scary stories. There will be extracts from Stoker and Le Fanu and if this doesn’t appeal to you then maybe you need to ask yourself if you really like ghost stories at all, or if maybe I just like ghost stories more than you do. Either way. Spooky.

haunted tunnel. definitely haunted. so haunted. the most haunted.

This is so totally my favourite thing coming up. A secret underground tunnel underneath the Phoenix Park? Eh, yes please that sounds deadly. It’s like one of those ghost trains you used to ride in Bray Amusements, except this is a real life tunnel and like, ten thousand percent definitely haunted. Irish Mafia man. Where would YOU go to kill someone? That’s right: underground tunnel. Secret underground tunnel. Tickets are unfortunately sold out right now but they might just have another secret release. Which of course is the best one to go on. Because when are you gonna get murdered on a ghost train underneath a park? On the unregistered secret ride. Oh yes.

So noisy, so beautiful

Ok this also falls under the “EXTREMELY WORTH CHECKING OUT” subdivision of this post, if you’re any way inclined towards goth music (I’m speaking in loose terms here, work with me) which you all should be. A documentary about arguably the number 1 coolest era of Irish music, covering the story of Cocteau Twins, The Jesus and Mary Chain, and My Bloody Valentine, and featuring interviews with the iconic lads of the trade Wayne Coyne, Trent Reznor, Billy Corgan and Robert Smith. Get your tickets now and bask in how you and I will never be as cool as the late eighties early nineties noise bands

The festival’s not over until the fat lady is brutally murdered and drained of every last drop of blood. Which hopefully these last guys can do. 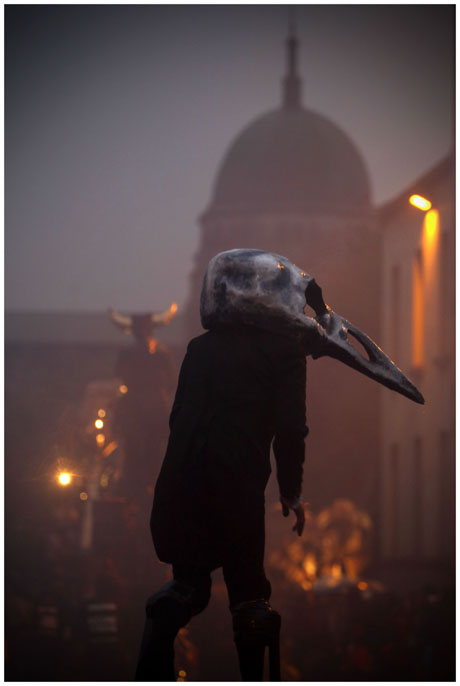 This looks so demonic and rad [source]

Macnas are going to take over the streets of Dublin with a ghoulish parade like no other, with creatures leaping from alleyways and doorways to join the assembly. Macnas is an internationally acclaimed Irish theatrical, spectacle and processional company and I cannot believe I have not heard about them until now. They are incredible at creating worlds, and their description of the coming event is giving me goosebumps

“Macnas populate this journey with mischief, active imagination, baptism and burial. These new priests and madmen whistle and unleash from the shadows, a haunted air heralding in the slumbering descent of countless agitations on high as they close the night upon the city like a trap door.”

Which certainly beats out Sunday night’s Goth Karaoke for my gloomy affections.

Pictures: http://www.bramstokerfestival.com/ except where otherwise stated.